Gammon, or ham, has to be my favourite festive meat. Cooked warm over the Christmas period or as a cold cut for the next couple of weeks, there is something special about such a simple joint that just keeps on giving. 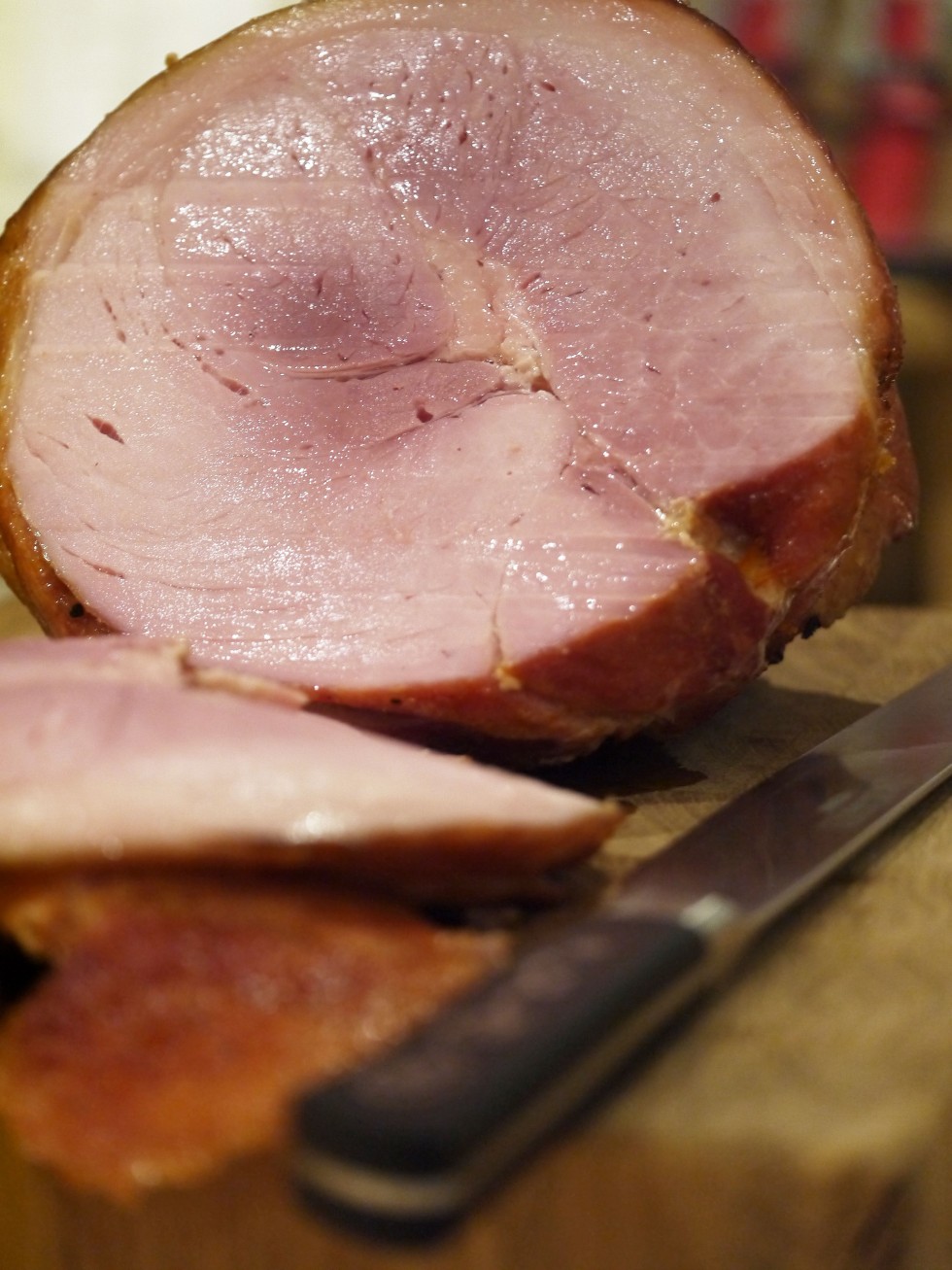 And smoking it, especially on a ceramic bbq like my Big Joe, adds so much flavour and gives you a beautiful, juicy, tender joint – especially if you have a few wood chunks to hand. I used cherry from Smokewood Shack in this cook which gave a lovely mild sweet fruity smoke but apple would work equally well.

I had a bit of fun with the glaze in this cook but the results were spectacular – my wife described it as “perfectly yummy” – giving a sweet, smokey flavour with a zingy tang.

Speak to your butcher about how your gammon has been cured. I picked up an english cured joint which means I didn’t need to soak it or simmer in water for too long (it’s not nearly as salty). So, having picked up what you want, just grab a few ingredients, a pot big enough to top your gammon with water and light up your bbq, or preheat your oven.

For those of you who are worried whether to grab a gammon or ham from the butcher; have no fear to buy yourself a gammon – it is simply uncooked. Once you have boiled, smoked or roasted it, you will have a perfectly cooked ham!

Place your ham in a large stock pot and top with water, throw in your peppercorns and cardamom pods and then bring gently up near a boil before turning the heat down to simmer for an hour. 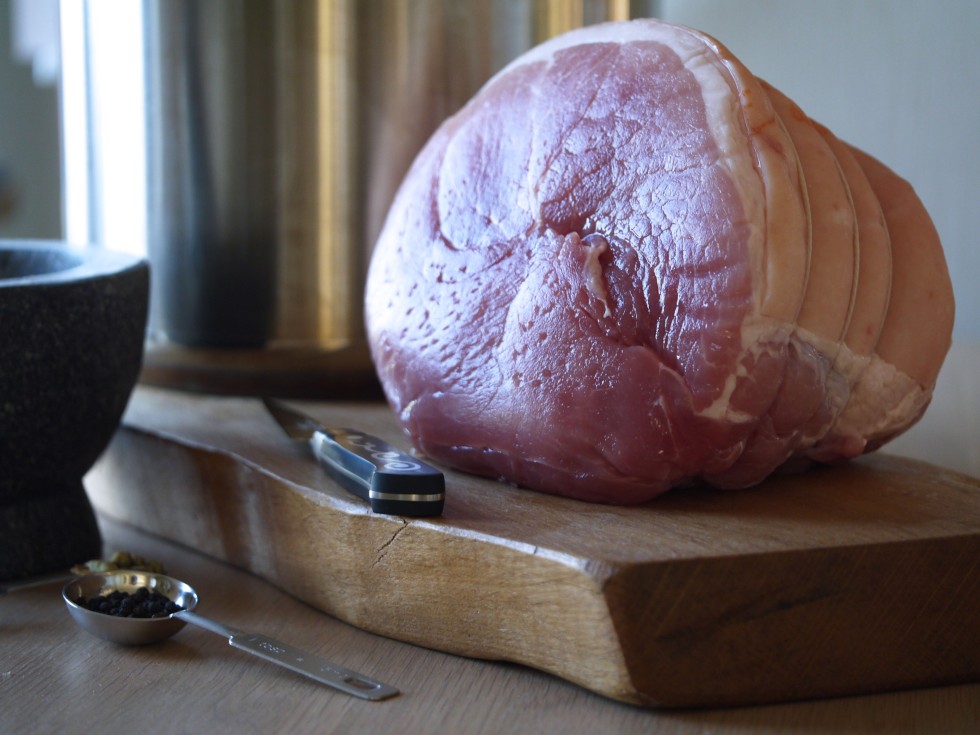 Meanwhile, light up your bbq and set it up for an indirect cook (I banked my coals) at 140C.

Once the ham has simmered for long enough, drain and then transfer to the bbq.

I added a couple of chunks of cherry but apple would work well too. I’m currently loving the selection of wood from Smokewood Shack and the website has some good suggestions about what wood smoke goes with what.

After an hour and a half… 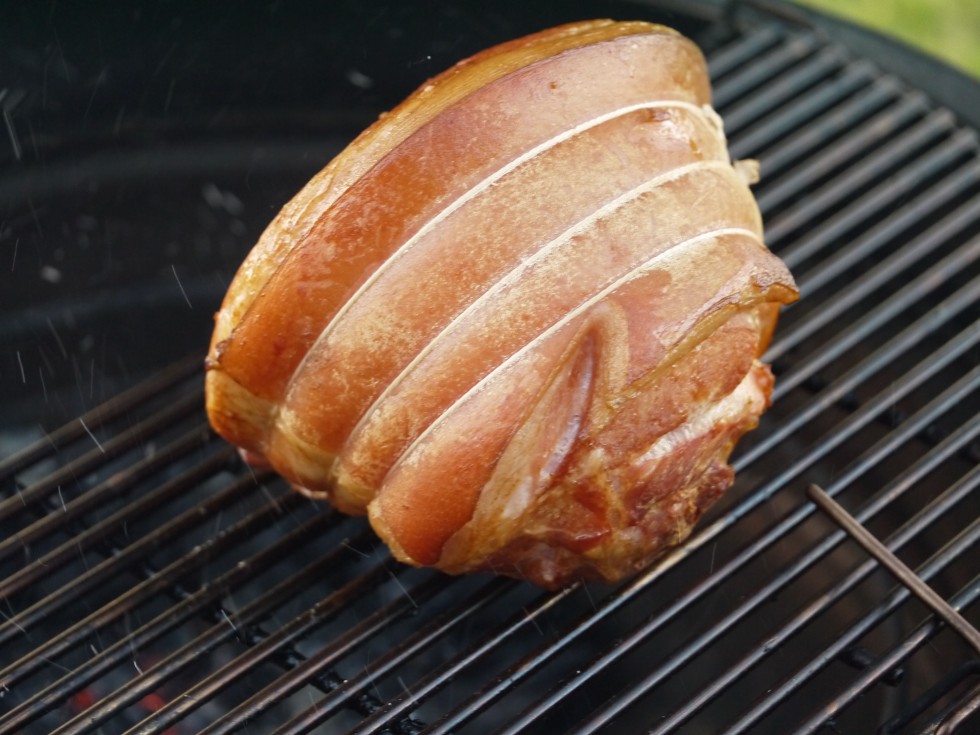 Just before the 2 hours are up: in a saucepan over a low heat, whisk together your ingredients for the glaze until the marmalade has mixed with the syrup and bourbon.

After 2 hours, brush your ham with the glaze…

…and continue to smoke.

Keep glazing every 5 minutes for 30 minutes.

Your ham should be about perfect by now – with a meat thermometer check the internal temperature is at least 62C.

Make sure you take advice from a little helper… 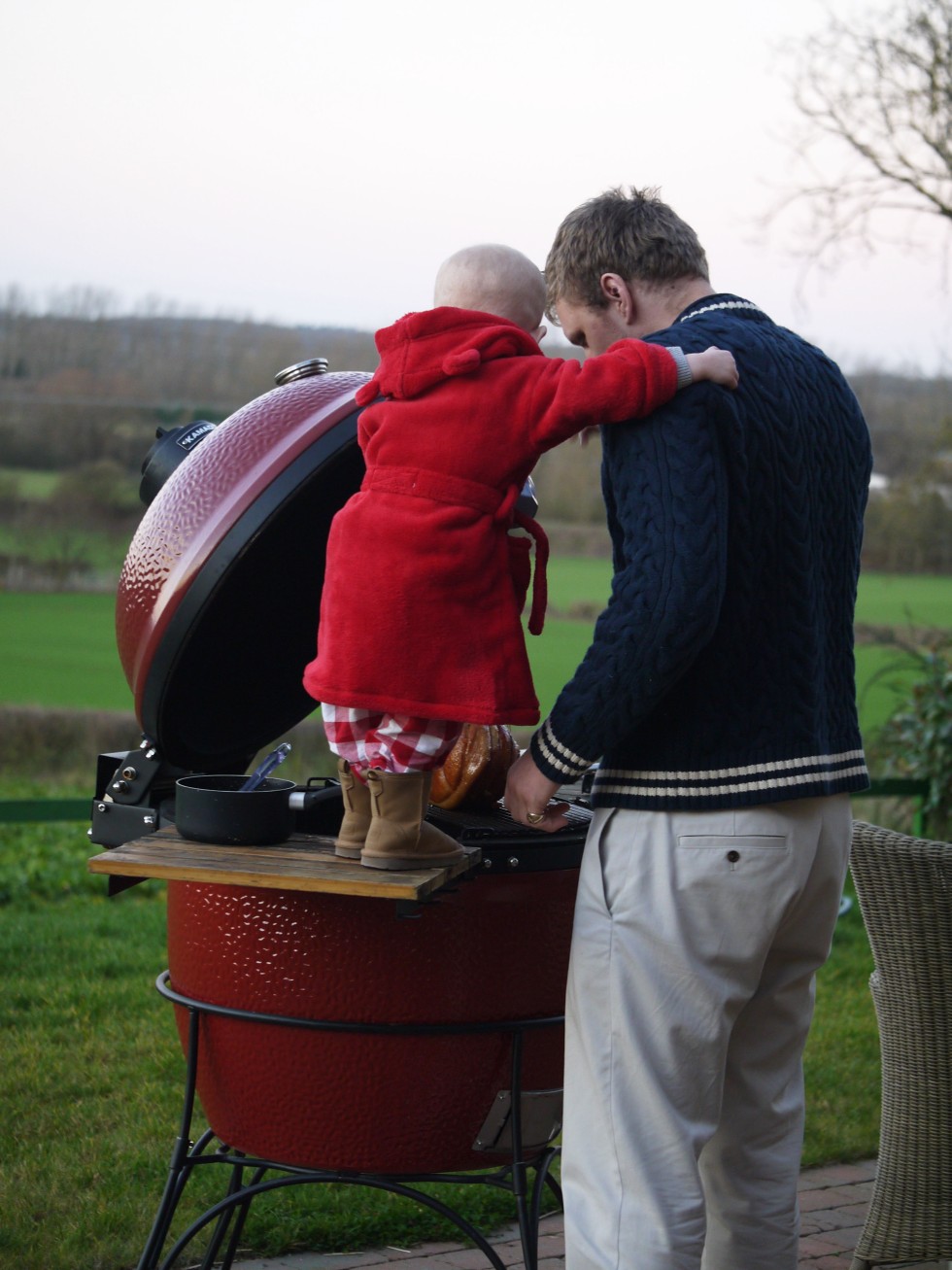 Take off the grill, wrap in foil…

…and rest for 30 minutes before serving. 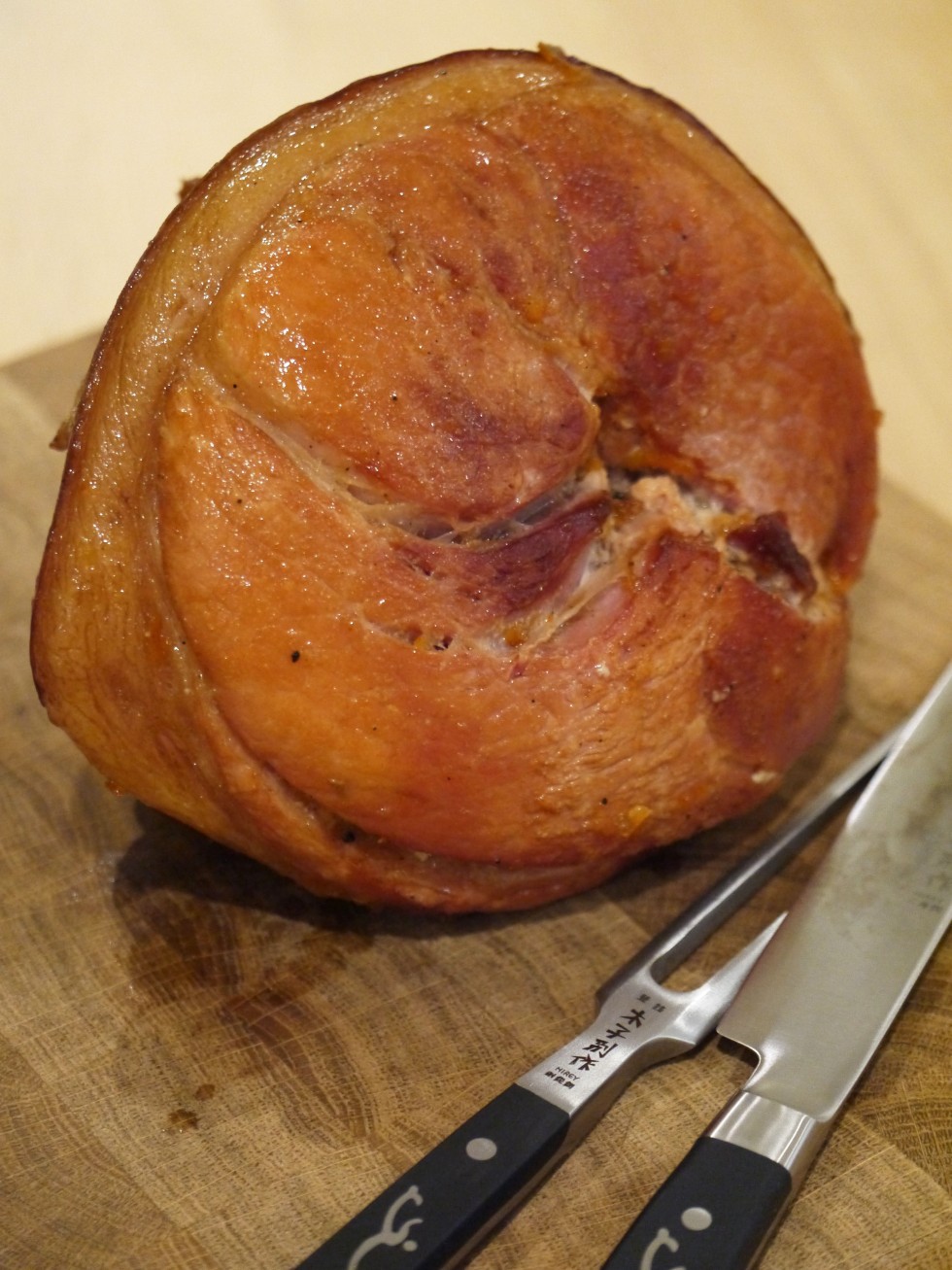 Carve into thin slices and serve with mashed potato and green beans, maybe a cumberland sauce too. Or cut into thicker chunks and serve with bread, pickles and slices of cheese.

One of the best things about ceramic bbq’s is the moisture they retain. Your ham should be beautifully succulent and juicy.

Glazing regularly for the last 30 minutes should leave a sticky sweet crust full of delicious flavour! 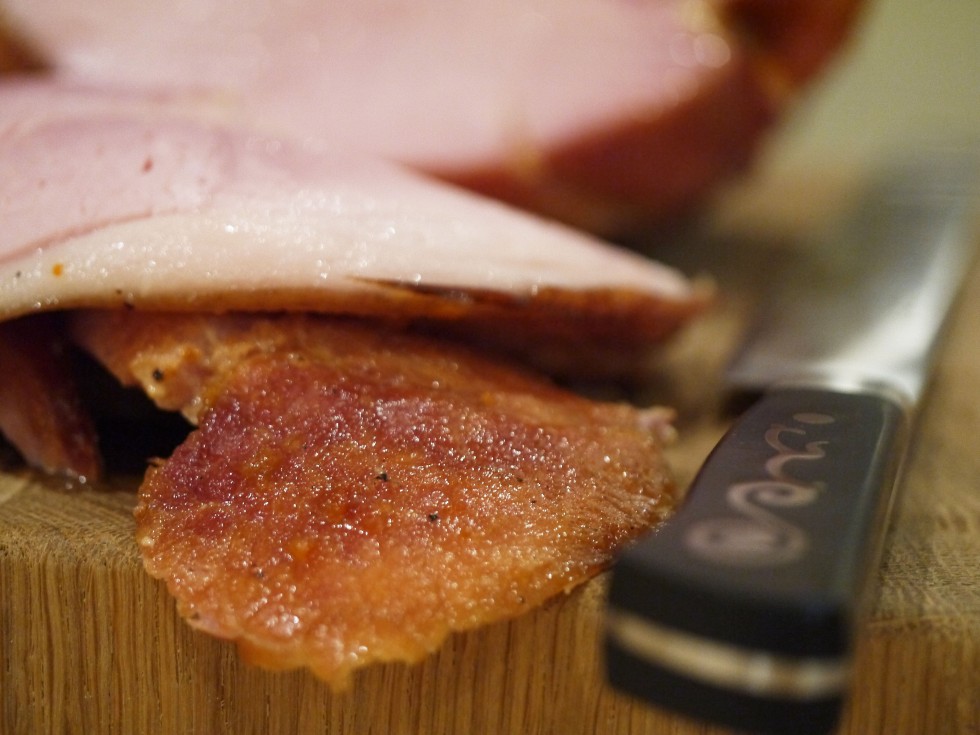 Any feedback or ideas are massively appreciated - would love to hear what you have cooked, or anything you want me to have a go at.
Previous Post: « Thermomix bread sauce with a twist
Next Post: Red pepper and tomato soup – thermomix »

Little change up today with a homemade iced coffee

One of my favourites for supper tonight: Bavette s

Grey skies and more rain but fruit’s starting to

Osso buco from @pipersfarm halfway through a #lowa