Pumpkin or squash take on smoke really beautifully and when paired with chestnut provide a sumptuous stuffing for pork tenderloin. And to be honest, no matter what stuffing you use, can anything sound better than pork three ways! Bacon! Tenderloin! Sausage meat!

We may have finally got our dose of summer sun, but autumn is fast approaching, the days are becoming shorter, children are getting ready to return to school and blackberries are beginning to fruit – but in our household, that means something very exciting is getting closer too: Hallowe’en is one of our favourite times of the year, and nothing screams Hallowe’en as much as pumpkin. Last year we went for a simple roast pumpkin and chestnut soup but if you are looking for something a little more extravagant then I can guarantee it’s worth giving this dish a go. 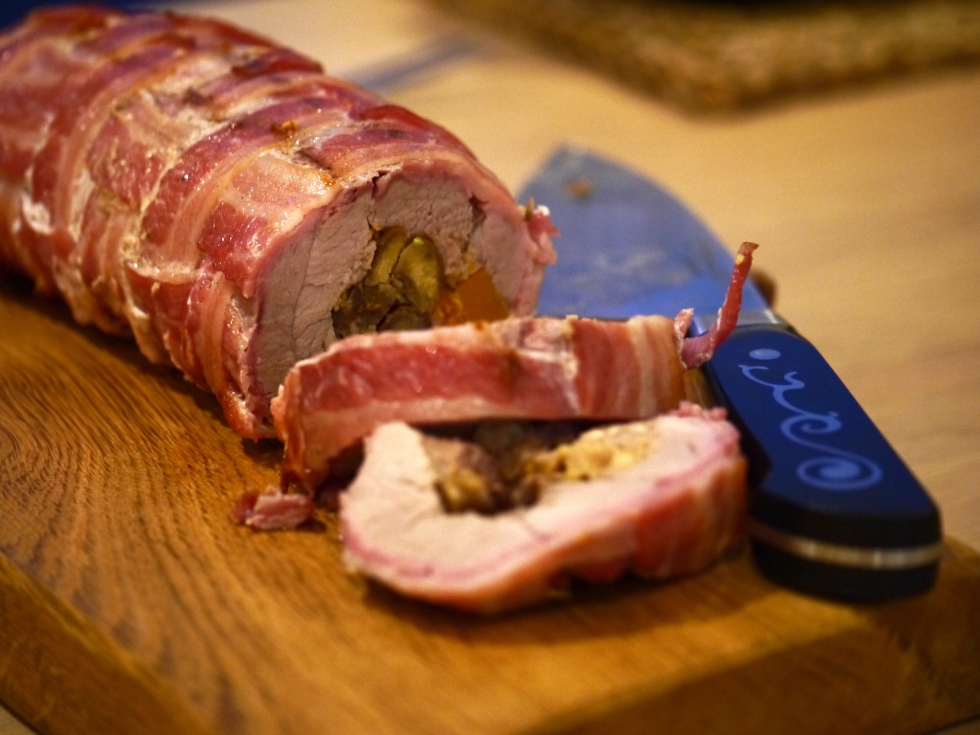 If you want to truly surprise with something decadent, then serve it up alongside Hasselback dauphinoise potatoes! 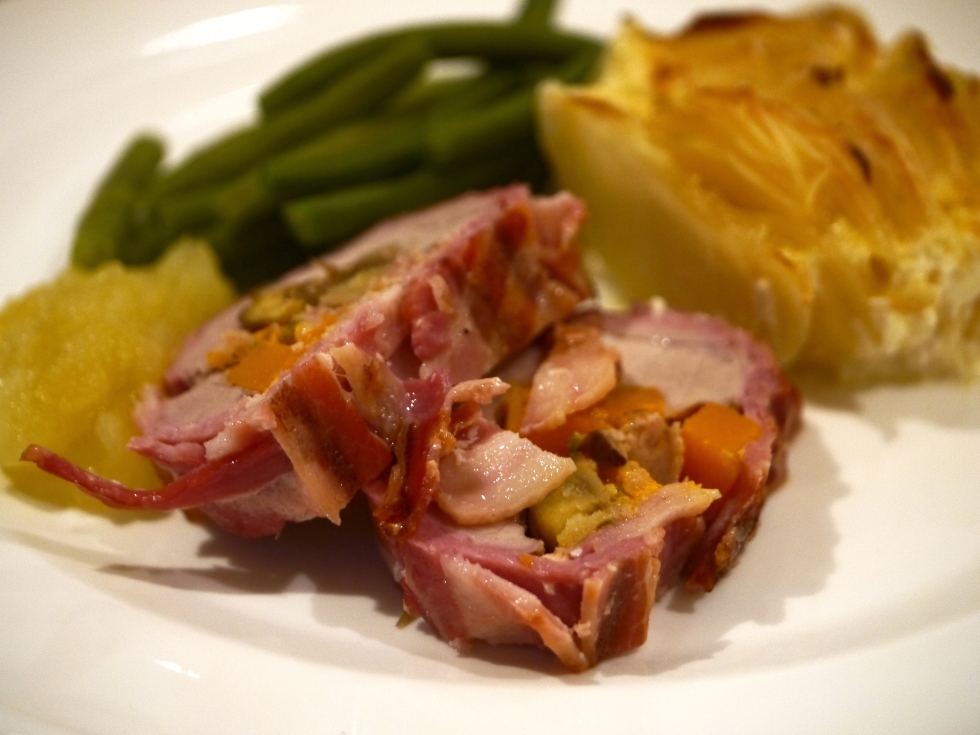 8 roasted chestnuts – gather your own and roast them yourself if you have the chance.

100g sausage meat – if you can’t get sausage meat from your local butcher, cut open a couple of sausages and squeeze out the meat.

Light up your bbq and bring it to around 120C indirect for smoking. I chose to bank the coals.

Cut the pumpkin/squash in half and then deseed. Season with a little salt and pepper and a drizzle of oil. You only need half a squash/pumpkin per pork fillet, but worth smoking both halves and using leftovers for a delicious soup the following day.

Lay the pumpkin/squash skin side down on your grill, on the opposite side to the hot coals.

Add a couple of chunks of apple wood for smoke.

Smoke for a couple of hours or until a knife passes through with little resistance.

Take off the grill and peel the skin. Leave to cool.

Slice your chestnuts into small chunks.

Mix together your pumpkin, chestnuts, one egg yolk, sausage meat, crumbled blue cheese and a pinch of sage. Season and leave to one side.

For the bacon wrapped pork tenderloin.

Bring your bbq up to 180C-200C with the coals banked for indirect cooking. 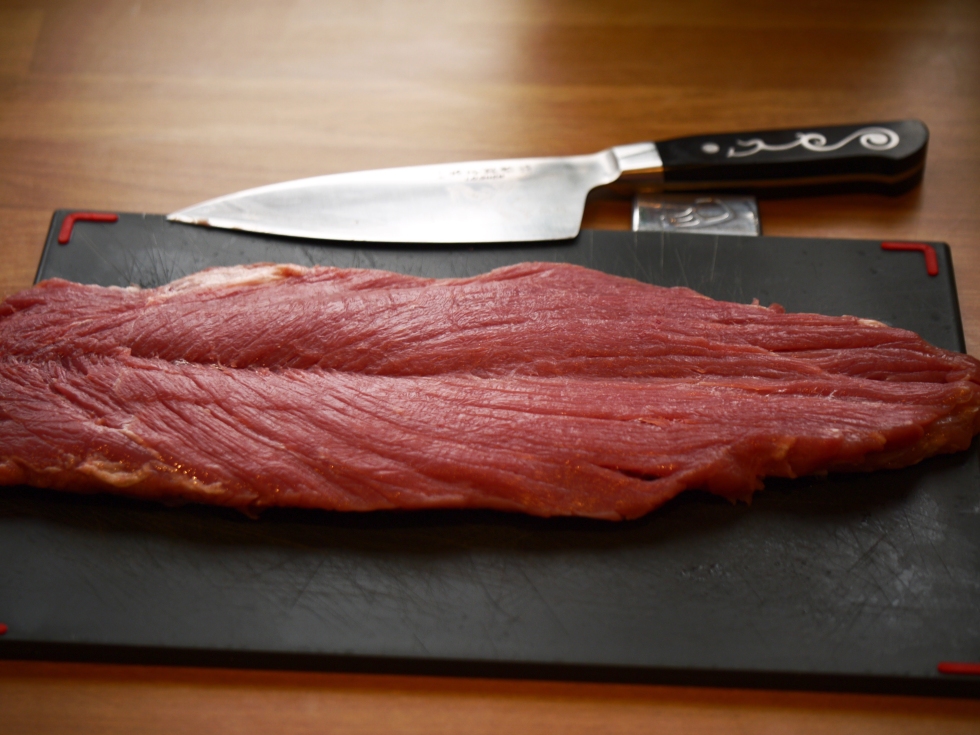 Cover the pork with cling film and pound with the flat side of a meat mallet until it’s around 1/2 inch thick. Start in the middle and work out. Trim your meat into a uniform shape. 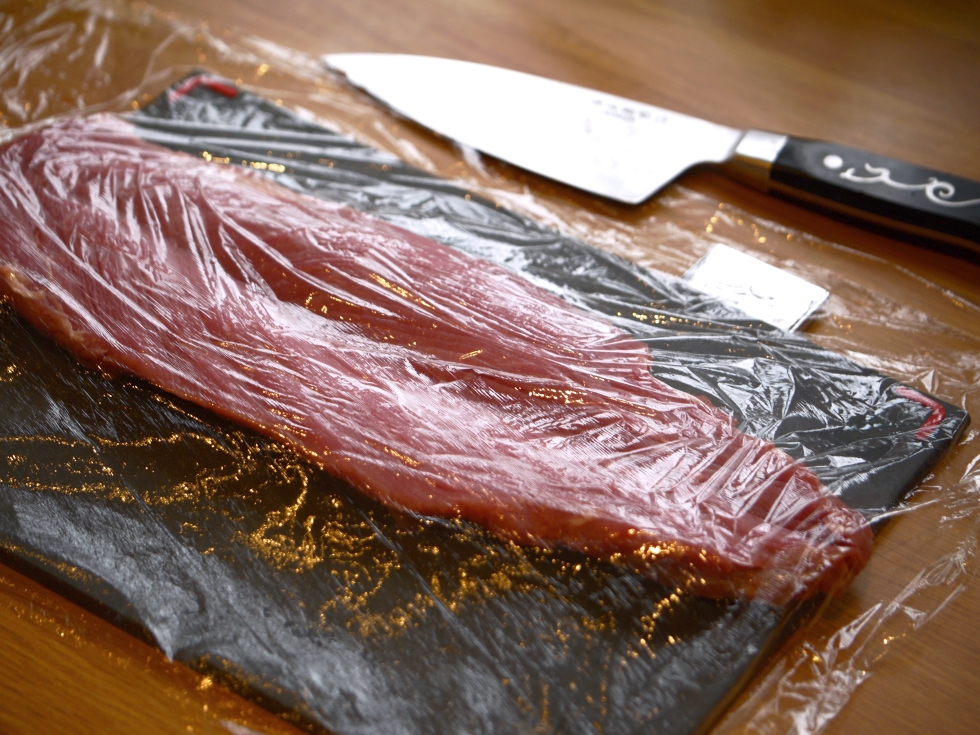 Next, make your bacon weave: lay 8 rashers of bacon vertically side by side. Interlace 8 more rashers horizontally to make a lattice.

Place your pork tenderloin across the middle of your bacon lattice, leaving 2cm of bacon clear top and bottom.

Spoon your stuffing across the middle of the pork tenderloin.

Tightly roll the bacon lattice into a cylinder; use the bacon border to join underneath. If necessary use some pre-soaked tooth picks to keep the bacon tightly rolled. Likewise you could tie with cooking string.

Lay your bacon wrapped tenderloin on the grill on the opposite side from the coals.

Cook for 1 hour or until the internal temperature of the pork tenderloin is 60C.

While your pork is roasting, prepare you apples. Chop them into 1cm chunks and throw into a saucepan over medium heat with your sugar and cider. Cover and gently stew until they have completely  broken down. Take off the heat and leave to cool. If you prepare a smoother texture, you can purée once cooked.

Once your pork is cooked, wrap in foil and rest for at least 10 minutes. 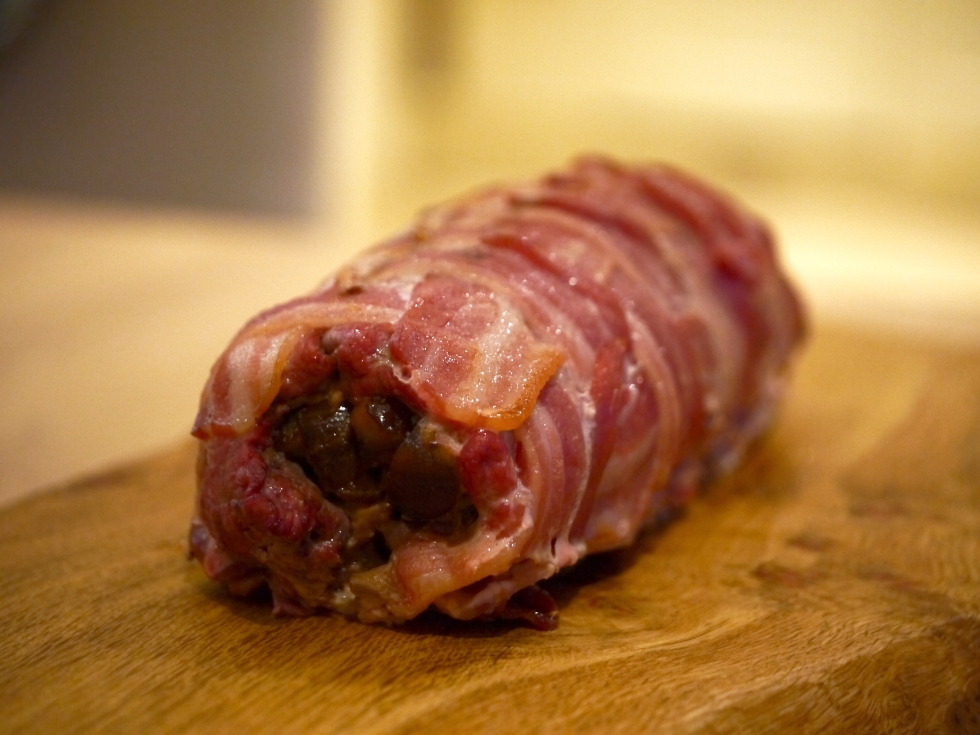 Any feedback or ideas are massively appreciated - would love to hear what you have cooked, or anything you want me to have a go at.
Previous Post: « Roast Water Buffalo
Next Post: Hasselback dauphinoise potatoes »

Little change up today with a homemade iced coffee

One of my favourites for supper tonight: Bavette s

Grey skies and more rain but fruit’s starting to

Osso buco from @pipersfarm halfway through a #lowa